How to Send a Campaign

Sending a campaign is the central feature within phpList. A campaign message is a single email message event sent to the members (subscribers) of one or more lists. A single message can only be sent to any subscriber once. In other words, if an administrator sends the same message to multiple lists (which share the same subscribers), each subscriber in these lists would only get that message once.

Sending a campaign can be initiated in a variety of ways. First and foremost, it can be accessed through the phpList dashboard, within the “Main” functionality section.

Apart from the dashboard approach, you can also access the “send a campaign” option by selecting Campaigns > Send a Campaign from the Campaign Menu Dropdown within the phpList title bar.

Select send a campaign to be taken to the “Send a campaign” page. This action shows the current draft campaigns, their respective ages, and their statuses in a section called the ‘Draft campaigns’ portlet. As the administrator, you can either access a previously saved campaign to continue it through to completion, or you can begin a new campaign by selecting the Start a new campaign. 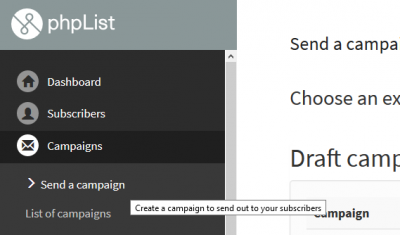 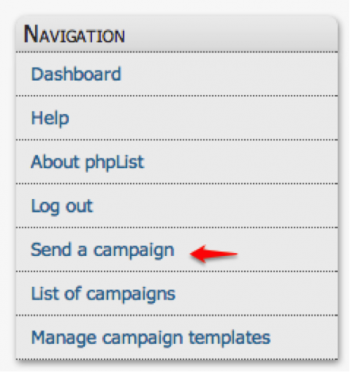 The template and steps for sending a campaign may vary slightly depending on your level of administrator access, but the general workflow is as follows. 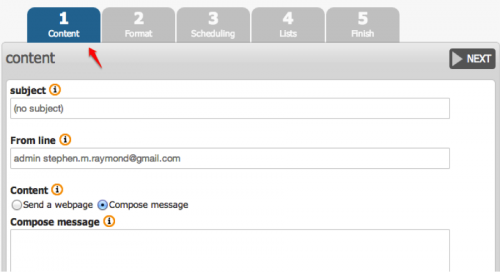 The Content portion of the send a campaign process requires a variety of fields be filled: Subject, From Line, Content, Compose Message, and Footer. Within the content portion, you are actually creating your message and providing the system with critical details about your message. Some of the more relevant fields are:

Note: At any point during the send a campaign process, the administrator can save the campaign as a draft and return at another time, or send a test campaign to an email of their choosing.

Sending as a Webpage

When sending as a webpage, you must specify the URL of the webpage you want to send. The system will then fetch the URL, and send it to your subscribers. Images will live on the website you send. When clicktracking is enabled, all links from the website you specified will be rewritten to go via phpList. Therefore, anytime a subscriber clicks on a link within the message, statistics will be gathered and rendered for the administrator to analyse on the “URL Statistics” page.

Note: this feature does not work for image maps. For more details on sending as a webpage, see the section on URL statistics.

To proceed through the send a campaign process, select Next.

The Format portion permits you as the administrator to choose between an html campaign and a text campaign. If you select html, an html version will be sent to subscribers provided that they selected html in their subscription preferences. If they had not selected html, the subscriber will receive the campaign email in text format.

Additionally, you have the option of verifying which template you would like to use during this step. Select the appropriate template from the ‘Use Template’ dropdown. If you use a template, the message will be placed in the location of the [CONTENT] placeholder in the template. [FOOTER] and [SIGNATURE] placeholders can be added, but they are optional.
Select Next to proceed through the process, or Back to edit a prior portion within the process.

Modifying the scheduling portion of the sending a campaign process allows you to determine the specifics around when your campaigns are sent. Note that the numbers in the process may change depending on an administrators’ access level. That is, scheduling will not always be step 3, as indicated in the image below. Some of the fields include: 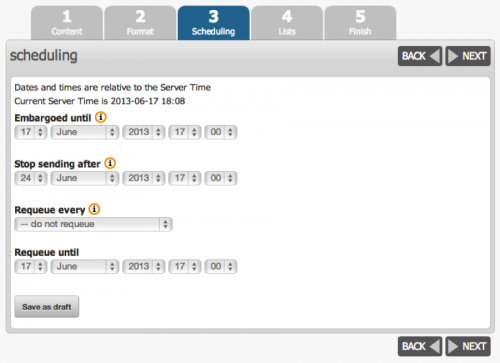 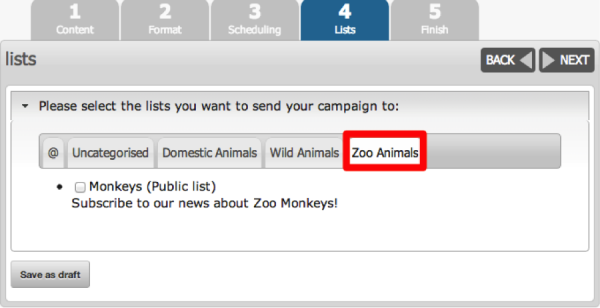 Finish is the final step in the send campaign process. If prior steps were not completed correctly, the system will notify you what fields are missing.

Note: Make sure not to select this once your main campaign has started or else you risk clearing statistics from real subscribers. 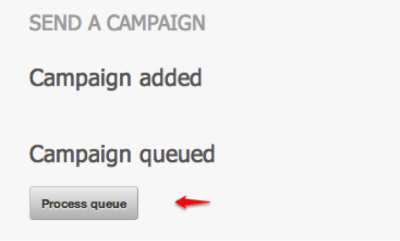 After a campaign is sent, the administrator is brought to a confirmation page, saying the campaign has been added and has been queued. Select Process Queue to initiate the sending of the campaign, as this is a separate process required to send the messages.

After Process Queue is selected, scripts will run, and information will be provided regarding the success or failure of the sent messages. When the queue is done being processed, the system will indicate this by showing an “All Done” message in the ‘Processing Queued Campaigns’ portlet.

Clicking on 'process queue,' after a campaign has been added and queued, will send all queued messages, provided they are not under embargo (Scheduled to be sent later on). Once you have clicked on process queue, the sending process cannot be cancelled. If you do not process the message queue, messages will remain in the queue. The idea behind the queue capability of the system is that an admin can prepare messages for sending, and then have them actually sent by a scheduler or cron job.

Note: When processing of the queue has started you should leave the browser window open till the result is displayed. Depending on the load of messages to be processed, processing the queue can take from a few minutes up to an hour or more. If even the system seems unresponsive when processing within a browser, the process is occurring.

PhpList will not send any message to people who have not confirmed their subscription. If you are sending more than 1000 messages, it is recommended you use command line queue processing. Processing the queue within the browser when there are more than 1000 messages being sent will significantly slow your system. After the queue is processed and the message campaigns are sent, A confirmation report will be sent to the email address(es) entered on the “configuration page” in the ‘Who gets the reports’ field. Additionally, as mentioned above, you can also be alerted by email when the message sending starts and ends, by entering one or more email addresses on the ‘finish tab’ during the Send a message process.

Note: Keep in mind that whatever queue processing method you use, you still need to put the messages to be sent in the queue.

Except where otherwise noted, content on this wiki is licensed under the following license: CC Attribution-Noncommercial 4.0 International

phpList is a registered limited company